Feel free to add or message me on Steam, but I usually respond quicker on Discord.

core has played in 16 leagues:

For OZF 34, we are continuing with four divisions, those being Premier, Intermediate, Main and Open. You can find the Player Restrictions linked on the season page as always!

Seedings are listed in order, along with the format being used next to the division name. Division administrators have been updated on the Administrators page, found linked on the season page. Expect matches to be generated shortly.

Returning with Season 34, we've been hard at work updating the documentation across ozfortress.com. We now have the competitive ruleset amongst other documentation displayed in PDF format, allowing us to more quickly make updates without needing to wait. We're hoping between this and a general drive to ensure what we have within our rulesets and docs is what we truly agree with and enforce going forward.

We are open to suggestions, feedback and concerns regarding any of the content on ozfortress.com. We want to continue our push to ensure our community feels represented within our decision making, and we hope going forward that it shows.

One thing that has been in the back of our minds when considering and working on changes for this season, was that we should be able to get behind and enforce any and all rules within our ruleset with 100% confidence. We have split the list below into two categories; Changes and Clarifications. We are providing some clarification on specific rules that players raised concerns or queries with last season.

We hope that players understand we are making strides to ensure consistency within our competitive ruleset, and make meaningful changes that players are rallying for. We have some exciting news coming up and we hope you are just as excited for them too!

Why are there infraction changes?

For a while, many players within our community, including ourselves, felt that clauses in the infractions ruleset were not where they needed to be, or did not fully reflect what we intended to cover under each clause. With the introduction of an easier way to make changes to documents on the ozfortress website, we’ve also brought updates to the infractions ruleset. Since many people don't read much, if not any of our news posts, we just wanted to state for the record that going forward we will be making a much stronger push towards ensuring our community is one where players can always feel free of harassment, toxicity and bigotry, a community where each players experience is treated as most valuable to ozfortress continued success and survival.

The Tier 3 category has seen the bulk of the changes and additions.

You’ll notice that the Tier 2 category has been trimmed down, with many of them now residing in the Tier 3 category. Infractions that apply affiliation with or impersonation of staff members have been moved entirely to Tier 3. There were no instances of this behaviour to back this change, but we feel as two-thirds of them were already Tier 3 infractions, that consolidating them into just Tier 3’s would make our stance on that clearer. Along with the Tier 2 evictions, any behavioural infractions that we felt belonged in Tier 3 now reside there. This change was also made to make our stance clearer, and we found typically cases of this behaviour were egregious enough to end up there anyway.

We've only made one addition to the Tier 1 category, namely our aliasing clause. This has been added to make it clear where this infraction sits. Aliases should be correct prior to the cast starting, or prior to connecting to the server. Approved Casting Organisations will no longer need to ask specifically for aliases to be changed but still may do so as a courtesy.

In the past, lower severity infractions would sometimes incur a discretionary warning, but this introduced an unintentional double warning system, where we feel by giving the warning and then on a repeat of that behaviour, awarding a lower-tier infraction, we would essentially be issuing another warning when infractions in themselves are warnings and are meant to dissuade players from reoffending. This has never been the case for Tier 3 infractions, but we felt with the clarification and expansion of the infractions ruleset, the removal of warnings from our infractions would not only make the process clearer for players but would allow repeat offenders less opportunity to "correct" their behaviour. This change will not affect those who rarely if ever accrue infractions.

As some of you may already be aware, Qixalite shares any behaviour violations on their platform with league runners like ozfortress. Part of this process involves reports made to us, and from time to time we'll ask them to perform a check for us. While they are working on tools to enhance this process, it currently is not a large part of our behavioural report process, and the bulk of our actions come from player reports.

While we do not have a specific list of words (slurs or derogatory names), we feel players can typically infer what is right and wrong. Regardless, we have added "jew" and "jewing" when referencing a play or positioning as something we will infract. We have done this in a further push to support those who are marginalized by these terms. This will be effective immediately, and will not cover any case prior to this post.

ozfortress players are in many forms representatives of ozfortress, and that reflection of their behaviour reflects onto this community, making it less appealing and inviting to new players.

This is something we've never really told anyone about in the past, and in terms of individuals on or not on the team, we will continue not to. But, we do not currently have any active league administrators on the panel beyond the current Head of Behaviour Panel samson. We endeavour to ensure that the composition of the panel will always be majority community members. While we feel that there isn't a need for the community to know that, we understand that you as the player place a lot of trust in us to moderate community behaviour in a fair, consistent manner whilst also considering views outside of the administration.

As for input on behavioural reports, the panel works independently and very rarely will ask for assistance from a league administrator. Administrators act as somewhat an arbitrator, with decisions on more complex issues typically being unanimous. Again, this was likely assumed, but we hope this helps ease concerns regarding the process. The process as it currently satisfies the needs we have seen since its inception, and we feel it will continue to serve to protect the experiences of each and every player.

We've updated the inconsistent team name of the Behaviour panel team / Infractions team across the entire website to better reflect what it is, a Community Behaviour Panel. Whilst we are making an effort, in general, to clear up the documentation and our news posts, this is an important first step.

An important second step - is the reporting system. Nothing will change beyond the template when making a report, and the area to make said reports are still the same, but there have been a few crucial changes you need to know about.

We hope these changes represent the players' expectations when managing behaviour, and more properly reflect our intentions for this system. The infractions ruleset will be something that sees updates in the future, and if you have any questions or concerns regarding anything that has been changed, feel free to chuck a DM to core#6440 on discord. 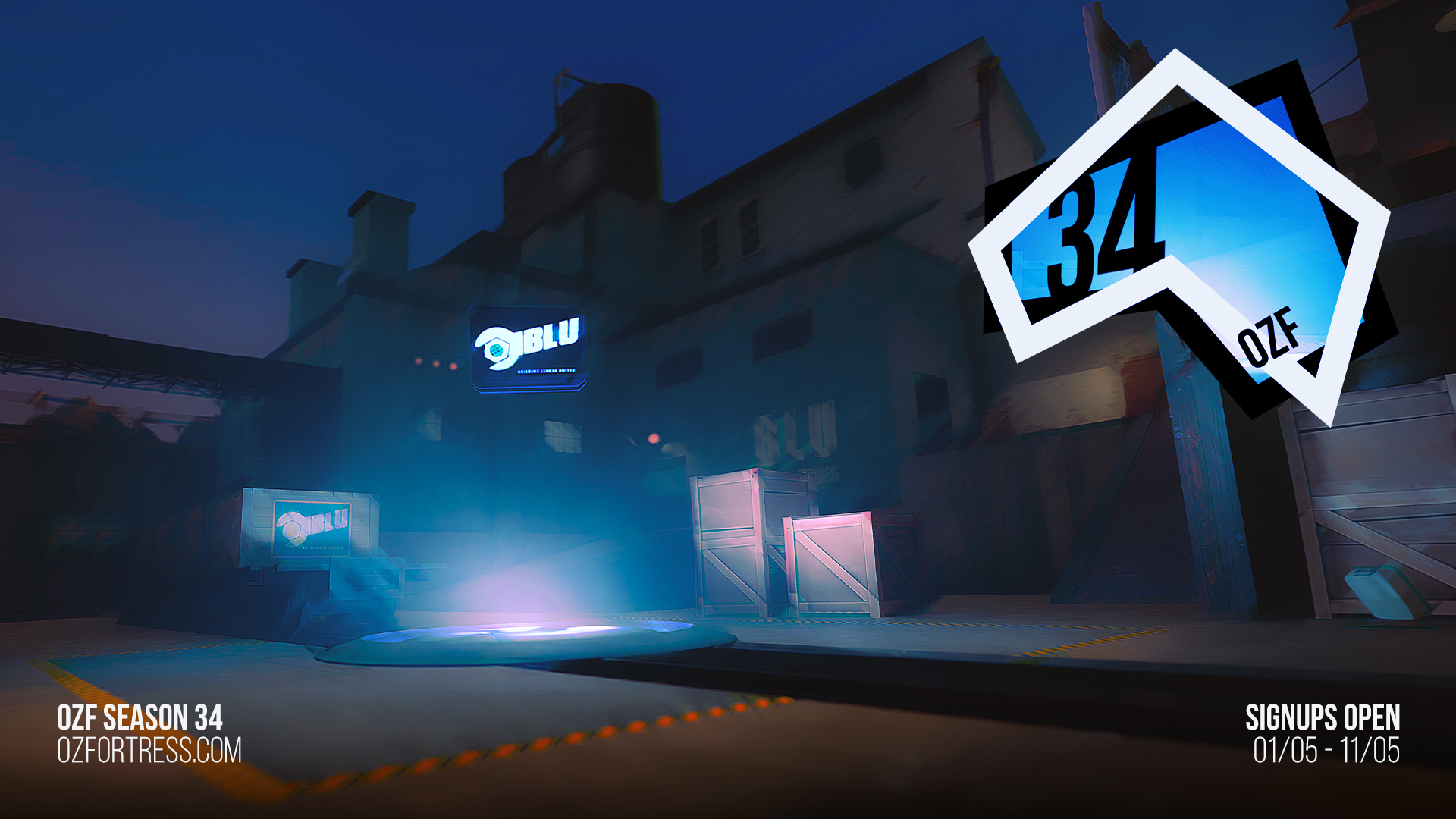 The ozfortress seasonal league returns with OZF 34! Returning from Ultiduo 16 in the off-season, we have been hard at work introducing changes to the rulesets and documentation on our website, as well as bringing in fixes and changes for OZF 34.

You can sign up for ozfortress season 34 from Sunday the 1st of May, up until Wednesday the 11th of May. We aim to have seeding out by the 14th of May (at the latest, hopefully on the 13th of May) with the season starting on the 15th of May. This gap between the closing of signups and the start of the season is to give the administration team time to seed teams with community input. ozfortress season 34 will begin on Sunday the 15th of May.

This poll will be used to collect feedback from everybody in the ozfortress community as a guide for future seasons and competitions. We ask that as many players participate as possible, we are looking to gauge interest in potential changes and additions.

Please send this poll to your team. We want as much input as possible to inform our future decision making! We had initially had a much longer poll planned for this off-season, but are looking to reformat how we do polls to more effectively reach players and collect meaningful feedback that will improve and enhance the direction of ozfortress going into the future.

Please note, we are not collecting email addresses. Google requires them.

WE WANT YOUR FEEDBACK - COMPLETE THE POLL

This page will show all player class restrictions for players in OZF 34. It will be updated throughout the season with each transfer window.

For applicants to be eligible to play in a particular round, the transfer application must be submitted by 11:59 PM AEST/AEDT time the Thursday of the round before the transfer window.

New items added to the game during the season will be banned until the next season. Modification of weapons will be evaluated by the administrative team. Taunts that are silent and/or toggle-able have been banned.

Grand Finals for Premier will be played as a best of five. All other divisions will be a best of three.

All brackets will be using the page playoff system for their finals. Matches with a single listed date will be locked to that date, those with a range will be negotiated within that range similar to regular-season matches.

ozfortress administrators are responsible for the smooth running of the ozfortress seasonal league. Remain in constant contact with them regarding team issues and potential team instability. They are also available to clarify anything about the rules or procedures of ozfortress competitions.

The best way to get in contact with an administrator is in the #admin-support channel on Discord. Click the following link to join our Discord.

The following people are available to solve issues in your bracket, however, for simple issues, we strongly recommend that you refer to the ruleset. From here, your own division administrators should be your first point of contact, however, if your administrators are not available, others may be able to help.